by Farming News
in Nomadic Farming
0 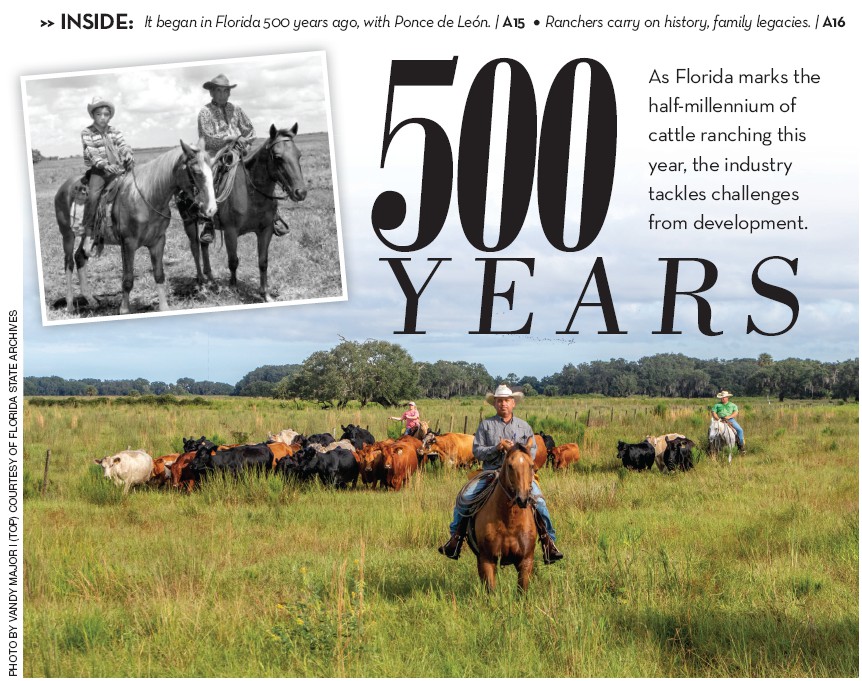 FROM TOP: Seminole Indian cowboys Fred Smith and his grandfather, Charley Micco, in 1950. Fred later became president of the Seminole Tribe of Florida. Cowboy Brian Boxson leads a small herd of cows and calves toward the cattle pens at Blackbeard’s Ranch in Manatee County.

IT ALL BEGAN THAT WINTER DAY in 1521 when Ponce de León came ashore near Charlotte Harbor on Southwest Florida’s coast, looking to create a permanent settlement. It was his second voyage to the land he had dubbed La Florida and this time he had 200 men, about 50 horses and six cattle, hardy Andalusian stock that came from Spain. They were the first cattle to arrive in North America and became the foundation of what became Florida cattle ranching.

Ponce de León’s effort was short-lived and ill-fated. He was mortally wounded in a battle with the Calusa people. The group abandoned the would-be settlement and took the conquistador to Cuba, where he died. But the cattle remained. They survived and even thrived, ranging free through centuries of raging wars and the rise of cattle barons on the pioneer frontier, becoming the backbone of Florida’s fledgling economy.

Half a millennium later, cattle ranching and the cattle industry are still a backbone of Florida’s economy, but threatened by growth that brings about 1,000 people a day to Florida and development that devours about 100,000 acres of land a year — equal to 156 square miles. 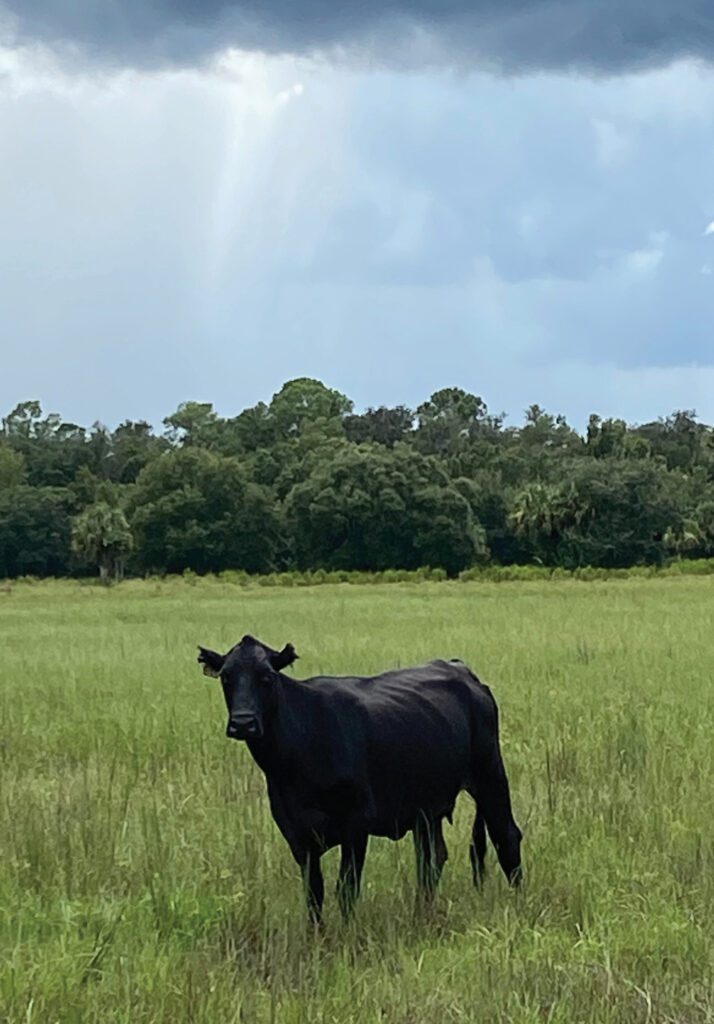 A lone cow has a pasture all to itself on the nearly 10,000-acre JB Ranch in Collier County. PHOTO BY MARY WOZNIAK

Ranchlands make prime targets for the next subdivisions or building projects, along with roads, other infrastructure and amenities necessary to serve the needs of that growing population. Developers are willing to spend the money it takes to gobble that land up — sometimes for even double the price.

Preserving the ranchlands left are pivotal to saving Florida’s water quantity, quality and wildlife, and meeting the challenges of climate change, scientists say.

“They are essential for accomplishing our wildlife and water resource conservation goals in Florida,” said Tom Hoctor, director of the Center for Landscape Conservation Planning and a professor at the University of Florida.

Now groups that may have been adversarial in the past — ranchers on one side, conservationists and environmentalists on the other — have banded together to try to reach those goals. They’re talking about various conservation programs and new technology, including artificial intelligence, satellite and drone-based “remote sensing,” to try to measure and quantify what the ecosystem services ranchlands provide are really worth to the state and its residents, then to convince residents that they are worth providing incentives to ranchers to continue receiving them. 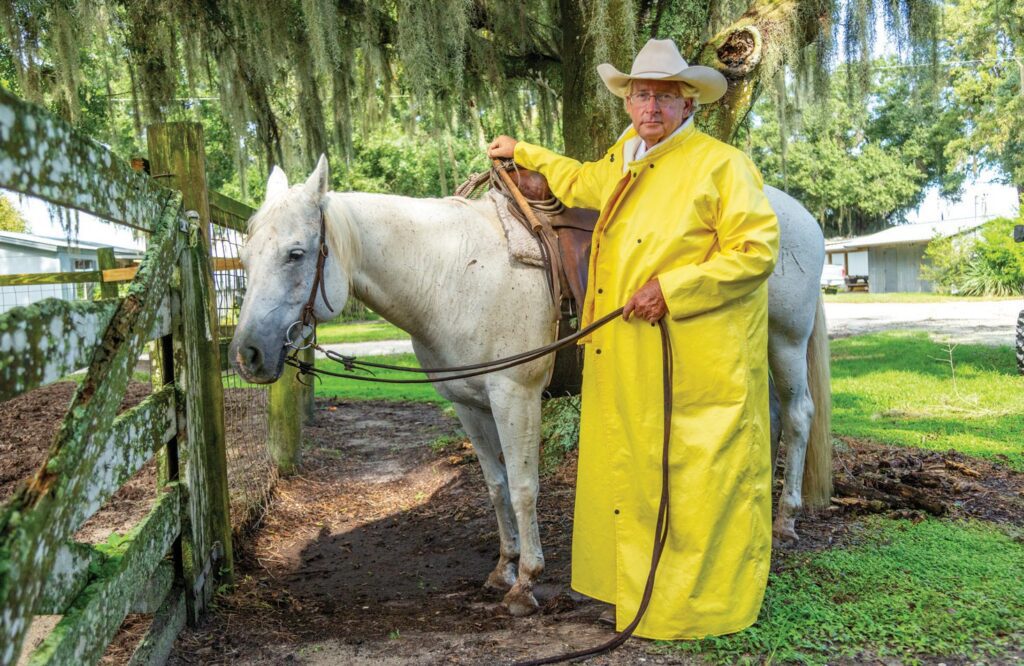 Jim Strickland, managing partner of Blackbeard’s Ranch and owner of Strickland Ranch, poses in his yellow slicker with his horse, Grey Lady. PHOTOS BY VANDY MAJOR

As Florida marks the 500th anniversary of cattle ranching, the focus is on the future.

“The greatest pressure on the viability of cattle ranching in the state is the unrelenting statistics of Florida’s human population growth,” wrote Hilary Swain and Betsey Boughton, in a June article in the Florida Cattleman and Livestock Journal.

Ms. Swain is executive director of the Archbold Biological Station, a nonprofit research, education and conservation organization in Venice. Ms. Boughton is director of research at Buck Island Ranch, a 10,500-acre working ranch in Highlands County owned and operated by Archbold Station, which provides a platform to research the functioning of grazing lands and sustainable ranching.

Beefmaster cows are driven across a sweeping expanse of Florida prairie at Blackbeard’s Ranch.

“How can the cattle industry in Florida remain sustainable in the face of such an onslaught?” they wrote. “First, remain financially viable. Second, to be recognized and supported by society as a land use that forms the backbone of the essential green infrastructure for a sustainable Florida.’

There’s that word “backbone” again. Florida cattle ranchers have had a steady supply throughout five centuries and it remains stronger than ever. As the challenges swirl around them, the cowboy culture remains constant, one rooted in love and respect for the land, its resources and in which a handshake is as good as their word.

Cattle ranching in Florida is a secret hiding in plain sight. It’s probably one of the last things people who flock here for subtropical sunshine and beaches would associate with Florida.

Yet ranchland covers about 6 million acres, or more than one-sixth the acreage of the entire state.

Florida has about 15,000 cattle ranches with an approximate economic impact of $900 million, according to the Range Cattle Research and Education Center at the University of Florida’s Institute of Food and Agricultural Sciences. They range from small operations to 12,000 cattle and up.

Florida consistently has eight or 10 of the top 25 ranches in the country for cattle, said Jim Handley, executive vice president of the Florida Cattlemen’s Association.

Ranches in Florida are cow-calf operations. That means ranchers maintain herds of cows to breed calves, which are then shipped to other states after weaning to be “finished” by grain or grass feeding until they reach maturity.

Florida has an estimated 1.69 million cattle and calves as of Jan. 1, 2021, according to the USDA southern region. Currently the state is 13th in the nation. 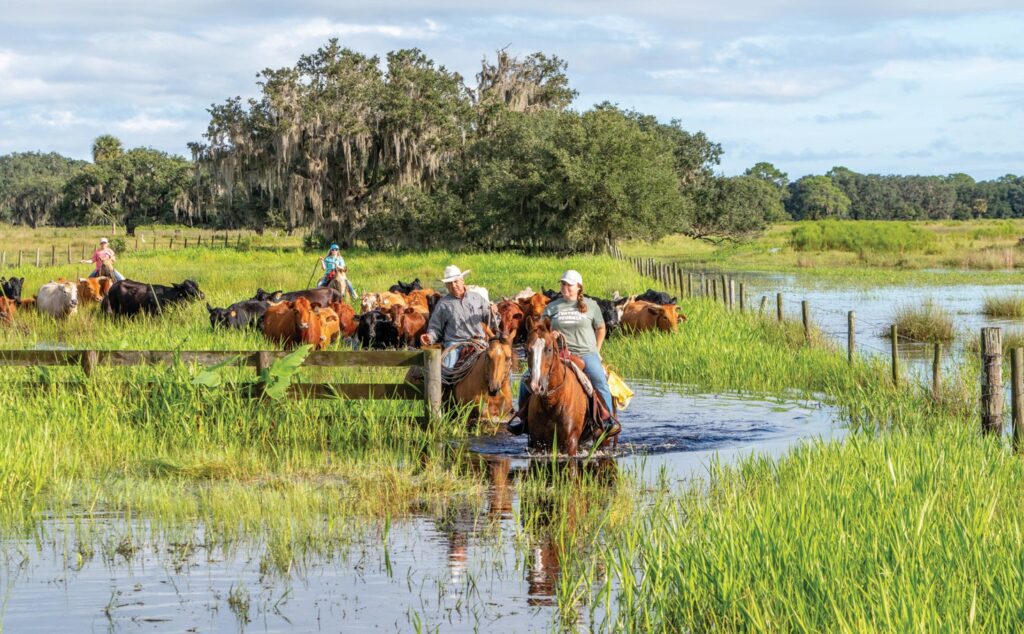 CLOCKWISE FROM TOP LEFT: Brian Broxson and Cassidy Jones lead cows through a pasture flooded with 4 inches of rain the night before. Calves in a pen on Blackbeard’s Ranch. Cows and calves are herded into pens where calves are separated out and sent to the livestock market.

But cattle ranches provide a lot more than beef to Florida’s population. Scientists refer to these benefits as ecosystem services. They include: Carbon sequestration (taking carbon dioxide out of the atmosphere through photosynthesis and putting it into the soil, where it’s bound up permanently), animal biodiversity, wildlife habitat, wildlife, wetlands protection, water storage and filtration. This is what scientists and cattle ranchers want to measure and quantify.

“What we want to show the 21.5 million people of Florida is, what does this land do for them that they don’t know it does?” said Jim Strickland, a rancher who is vice chairman of the Florida Conservation Group, which advocates for Florida agriculture and conservation. “Carbon sequestration, how much? We want to show them what is it worth to you to have a wildlife corridor for endangered species habitat, for the connectivity of water, for the cleaning of water by having sheet flow across these lands, by having all these ephemeral wetlands.” 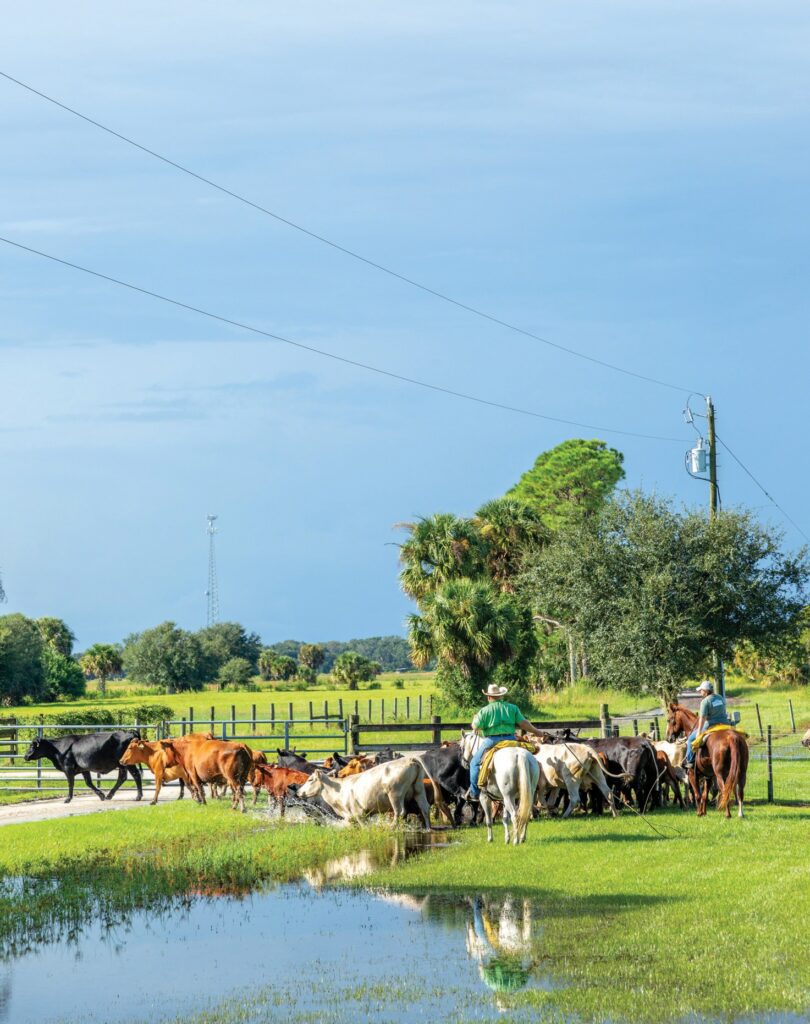 At the University of Florida, Mr. Hoctor also oversees and manages the Florida Ecological Greenways Network, a database of land needed to protect habitat and wildlife migration routes throughout the state. There are nearly 3.2 million acres of ranchland in the top three priority lands of the greenways network. Only 555,703 acres of ranchland are protected.

The network is also one of the major criteria for determining lands suitable for the Florida Forever program, the state’s conservation and recreation lands acquisition program.

A conservation easement buys the development rights of the property so that it cannot be developed any more than it currently is at the time the easement goes into effect. The private landowner still owns the property, is responsible for continuing to manage it and pay taxes on it. But the land must remain as it is in perpetuity. 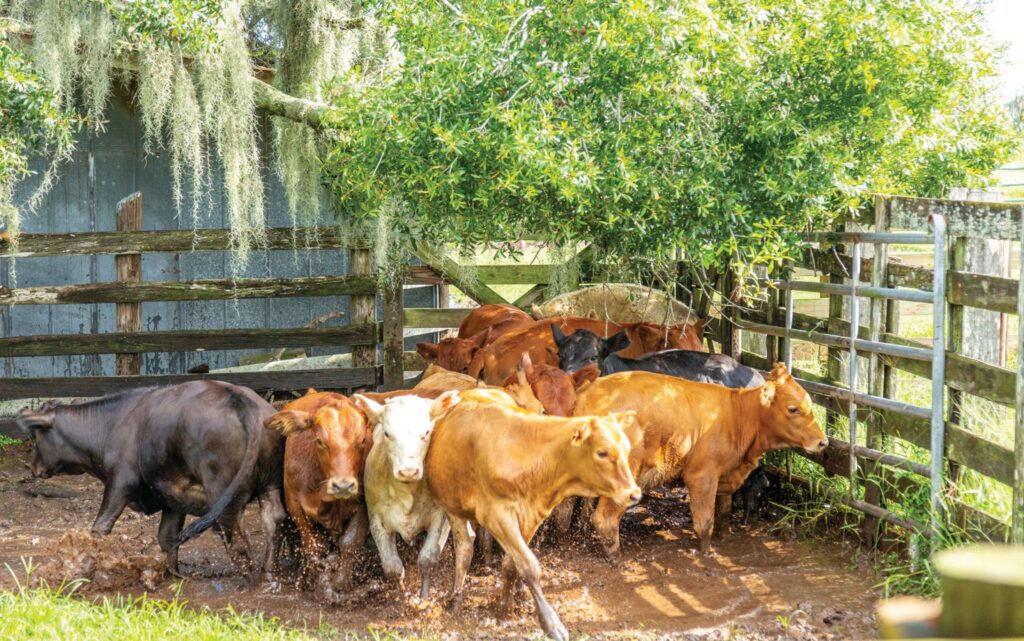 The Florida Conservation Group tries to educate and assist people in getting conservation easements on their ranches or timberland.

That’s where Julie Morris comes in. She is the Florida and Gulf programs manager for the National Wildlife Refuge Association, a wildlife biologist with extensive knowledge and experience in land acquisition and easement programs.

Ms. Morris is on the board of directors of the Florida Conservation Group and works with Mr. Strickland and Mr. Hoctor. She and Mr. Strickland help guide people through the process of protecting their lands through various programs like Florida Forever, the Rural and Family Lands Protection Program, and the federal Wetland Reserve Easement program. 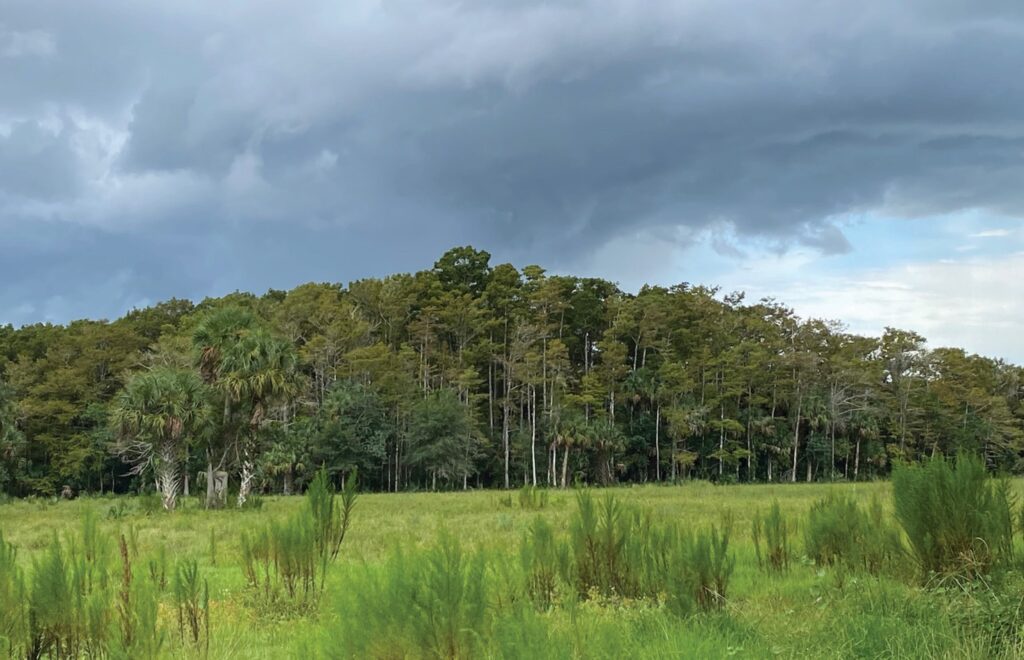 The landowners, or in this case, the ranchers, are basically selling their development rights for about 50 cents on the dollar, Ms. Morris said. It’s a real bargain…

In-depth: A new Palestinian-led initiative - Fazaa, or assistance in Arabic - is helping to protect Palestinian farmers from...

Carolyn with some of the Sudanese children during one of her visits to the school.Carolyn Murray and her charity,...

When it comes to climate debates, we're often told we should eat less meat and dairy. That's because farming...

Pastoralists in Kwale County can now breathe a sigh of relief after Governor Salim Mvurya commissioned a feedlot farm...