‘I’m a long way from being vegan’

by Farming News
in Nomadic Farming
0

Bandelier National Monument near Los Alamos, New Mexico, may not be the first place you think of for fall aspen viewing.

Apples are Mexico’s hidden fruit — except at Christmastime

Bandelier offers excellent access to ancient dwellings nestled against the walls of Frijoles Canyon in the Jemez Mountains. For over 10,000 years, people have inhabited this area, from nomadic Paleoindian hunter-gatherers to the Ancestral Pueblo people who, from 1150 – 1550 CE, built their villages from blocks of soft volcanic tuff. Placing horizontal rafters, called vigas, into holes carved in the rock walls, they were able to create multi-story, multifamily housing, like Long House with its cavate structures for storage.

As with many cliff dwellings in the Southwest, why this farming community left is unclear; Frijoles Creek still runs at the base of Alcove House (perched in a wide cave 140 feet above the stream), and I saw fat squirrels gathering seeds nearby, and deer quietly grazing their way across the ruins of Tyuonyi, a three-story pueblo built in a freestanding ring-shape around a central courtyard.

Anthropologists speculate why the Ancestral Pueblo people may have moved on; maybe population growth strained increasingly limited resources, or an extended drought made the area uninhabitable, like the megadrought currently ravaging the Southwest over the past two decades.

Drought stress and resource strain don’t only impact human beings. The prolonged moisture necessary to the reproductive success of quaking aspen (populus tremuloides) is long absent here. That’s why I have come to see the aspen – to enjoy the trees’ iconic golden fall color, and also to check on their health. 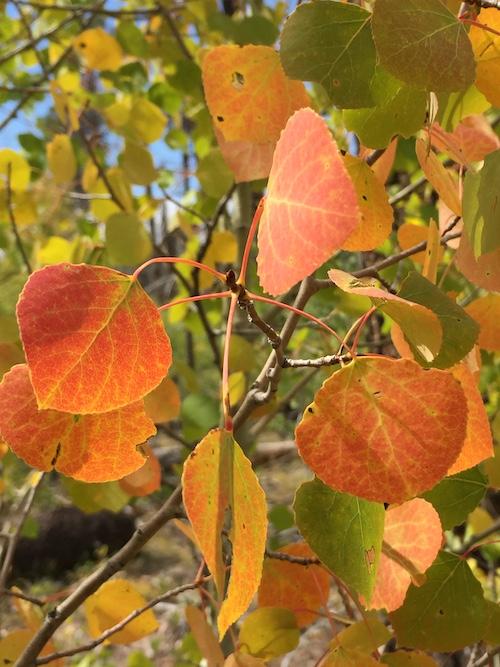 Climate change has negatively impacted the aspen’s high-altitude ecosystem. Most of Bandelier sits below the 8,000-foot elevation of the aspen’s preferred habitat range. But up in the northwest corner of the park sits Cerro Grande, the “Grand Hill” at 10,199 feet, anchoring Bandelier to the rim of Valles Caldera National Preserve next door. Drought-fueled wildfires in this area, notably the Cerro Grande Fire (2000) and Las Conchas Fire (2011), killed substantial numbers of mature aspen in Bandelier’s high country, but they haven’t lost entire clones yet, according to Kay Beeley of the National Park Service.

Kay let me know that earlier this summer she had heard about an outbreak of oystershell scale, new to New Mexico. It was found around Pajarito Ski Hill and on the west side of the caldera up San Antonio Creek, so she thinks it’s likely in Bandelier – “but no one has gone looking for it or reported it yet.”

That’s why I decided to go looking.

Arriving early at Cerro Grande Trailhead, the cool morning air echoed with the eerie, wavering calls of bull elk, their vocal challenges rising from the pine forest with the last of the dawn’s mist. Even though I’ve lived in elk country for more than 30 years, until now I have never heard them bugling in the morning, only at twilight, when their raging hormones bring them down from the hills to lock horns and battle for dominance over each other and the female herds.

Elk are not deer – these ungulates are massive, like moose — and during the rut, hikers are well-advised to give them a wide berth. Looking across the valley at the next mountainside, I could watch them calling as they walked between aspen groves, heads lowered, slowly swinging their antlers, just itching for a fight.

When they’re not fighting, elk are often itching to rub the velvet from their antlers, and mature aspen trunks are the perfect size. Their rubs leave dark gray scars on the lower 4-5 feet of the trees’ white trunks, typically not fatal to the trees; however, opportunistic pests and fungi and other diseases can take hold in the damaged bark.

Young aspen twigs and leaves often make tasty snacks for elk, as well. At the bottom of the trail, forest managers had fenced off one small aspen grove in ten- to 12-foot-high chain-link topped with barbwire that extended outward almost horizontally, a classic design intended to keep out elk. Other high-elevation national parks like Rocky Mountain also create protected zones of aspen to study their resilience and growth unimpeded by elk grazing and rub damage. 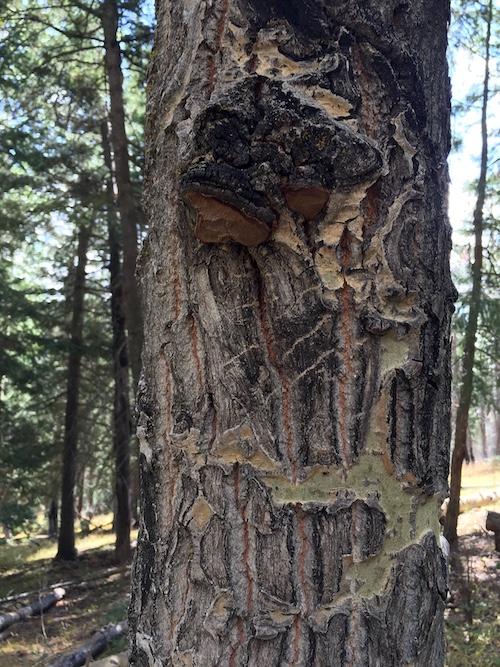 As the trail rose, I listened to the elk’s high-pitched whistling voices ringing through the forest. They tend to crash their way heavily through the trees as they travel, so you can usually hear them nearby, and I kept my eyes and ears open. I walked past hillsides of tall, charred spikes of unidentifiable tree trunks standing next to green Ponderosa pines, their trunks blackened on one side, survivors of whichever fire took out their kin. New aspen had popped up like wildflowers on these cleared hills, even as their larger siblings stood dead within the burn scar. Often, I stepped off the trail to inspect their leaves, branches, and trunks, looking for the distinctive overlapping scales of the oystershells. Mostly I found elk scarring and thin shreds of bark or snapped twigs nibbled hastily and left hanging. On one tree, I noted distinctive parallel scratches from a bear’s claw. But no scale.

It was the same on the Alamo Boundary Trail and the Upper Frijoles Canyon Overlook Trail, all rich with young aspen growing up through stands of burned forest. Fire supports aspen regeneration, burning away competition for sunlight and soil nutrients. I marveled at the varied colors of the leaves, shimmering green, chartreuse, and gold in the sunlight. As the nights lengthen and the weather cools, the leaves’ green chlorophyll breaks down for the year, revealing yellow-colored carotenoids stored within the leaf cells, phytonutrients that help absorb sunlight for photosynthesis.

Here and there, rebel aspen trees blazed orange and red. Some aspen, responding to warm, sunny fall days and an excess of stored plant sugars, produce anthocyanins in the autumn, fiery red pigments that make the healthy trees appear to be burning anew beside their golden neighbors, eye-catching between the tall blackened stumps and standing evergreens.

As I walked the return loop from Upper Frijoles Canyon in the late afternoon, I stepped toward a young aspen grove – and suddenly jumped back, startled. Something very large, screened by the stand of trees, had huffed loudly above my head, it’s voice ending with a squeaky, squealing wheeze. Then it wheeled and pounded away, crashing deeper into the forest.

I let out a sigh of relief. It’s breathtaking, and exhilarating, hiking in the New Mexico mountains in the autumn chill. Light snow began to fall as twilight settled over the high hills. For now, the aspen in Bandelier National Monument seem to be holding their own, colors burning brightly on the steep slopes, dodging invasive scale and surviving extreme drought, ongoing wildfires, and hungry elk.

Barbara “Bo” Jensen is a writer and artist who likes to go off-grid, whether it’s backpacking through national parks, trekking up the Continental Divide Trail, or following the Camino Norte across Spain. For over 20 years, social work has paid the bills, allowing them to meet and talk with people living homeless in the streets of America. You can find more of Bo’s work on Out There podcast, Wanderlust, and  www.wanderinglightning.com

This article was made possible in part by Western National Parks Association.

Apples are Mexico’s hidden fruit — except at Christmastime

Archaeologists blown away by DNA from mysterious Asian mummies: ‘We knew nothing!’ |

SINGAPORE - Lim Chu Kang's future as an agriculture-technology precinct could see it co-locating farmers, researchers and other experts...

When Katey Hedger walked into the Satria Bird Market in Bali in March 2021, the first thing to hit...

Over 500,000 hectares of sesame farm, which is 70 percent of Ethiopia's annual cultivation for the cash crop, skipped...