Sharing the Legacy of Eoin King

When Eoin was 19, he said to his father that working in the tech industry where he’d been interning every high school summer, “wasn’t for him.” Instead, he wanted to focus on his true love while at Chico State University, enrolling in environmental science classes and growing organic vegetables in the backyard of his college rental.

Tragically, Eoin Jun King died in a car accident February 2022 at the age of 31, leaving behind his mother and father, Miyuki and Niall, and younger brother, Fionn. While the team at OFRF never knew Eoin, he made a decision some years ago that intertwined his life with our work: he chose to bequest his IRA contributions from a past employer, Vital Garden Supply in Nevada City, CA, to support OFRF’s mission of improving and expanding organic farming systems, a sentiment that was very close to his heart. 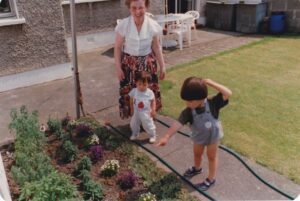 Eoin’s passion for organic began when he was a child growing up in Saratoga, CA where his mom introduced him to growing vegetables and fruits organically. Miyuki was raised in Japan, and every summer until college Eoin would go to Japan and see the family farm. He spent hours outside in the garden with his Mom, and grandparents, and Eoin quickly picked up on her adoration of nature. During college, along with his backyard veggie garden, he would bike to farmers markets, collect produce, and cook local foods for other students to try, calling it “Bike Kitchen.” His first job after college was at Chico Natural Foods Coop.

More recently, Eoin bought a property near Grass Valley, CA. A self-taught and gifted carpenter, Eoin began to build a large 8-ft fence around what would become an organic vegetable garden. Sadly, he hadn’t finished the fence or started the garden by the time of his death. Now his father is spending time at the house, learning about Eoin’s life in the Sierra foothills and maintaining the property.

Eoin’s full name – Eoin Jun King – is a combination of his Irish and Japanese heritage and means “​​A Gracious Honest King.” And he lived up to his name. Eoin made connections with people from all walks of life and often supported friends in need. On trips to Japan with his family, Eoin seamlessly started conversations in fluent Japanese, taking full advantage of every day. His dad told us, “He put 90 years of life into 31. How many people go through life and do what they want to do?” Niall and Miyuki are proud that Eoin did.

We know these topics are not easy, yet Eoin has left us with two extremely special gifts – his story and his financial support to continue doing the work he cared so much about. We hope as you plan for your future, you consider giving to organizations and communities that you love, be it OFRF or others. Learn more about planned giving or email Haley Baron, OFRF Partnership & Development Director (haley@ofrf.org), for more information.