The Farmers Helping Hellbenders project, led by Rod Williams, Purdue University professor of forestry and natural resources, and Nick Burgmeier, Purdue Extension wildlife specialist/Help the Hellbender project coordinator, will receive $2.7 million to improve hellbender habitat in a four-county region in south central Indiana, the only remaining habitat for hellbenders in the state, by expanding the use of agricultural conservation practices to decrease sedimentation in local rivers systems.

For much of the last 16 years, Williams and his team have researched Eastern hellbenders, spearheading regional conservation efforts and advancing hellbender captive propagation – the rearing of this ancient animal in captivity and their eventual return to the wild.

Sedimentation is a major cause of hellbender decline and reduced sedimentation will increase available habitat for hellbenders, mussels and aquatic macroinvertebrates. This project will also address soil and nutrient loss, also concerns for agricultural producers. The targeted conservation practices and systems have been shown to have long-term benefits for agricultural systems and operations.

“Through this initiative, focused on Crawford, Floyd, Harrison and Washington counties, we expect to improve water quality and aquatic wildlife habitat,” Burgmeier said. “Simultaneously, we hope to improve soil retention and nutrient availability to crops by helping farmers implement practices such as cover crops, riparian buffers, grassed waterways, etc. Additional benefits will include increases in riparian and pollinator habitat and increased protection for karst habitat through the selected targeting of sinkholes.”

After five years of breeding efforts, Williams’ partners at the Mesker Park Zoo in Evansville, Indiana, successfully bred Eastern hellbenders naturally in captivity in October 2020, signifying the culmination of a long and collaborative effort to breed and restore this endangered species to its native environment.

“Wildlife conservation, as a science, is complex,” Williams said. “This RCPP project builds upon 16 years of partnerships, from university researchers to Extension educators, zoos, nongovernmental organizations and state agency professionals. Each partner brings a special talent, community asset, and passion to Eastern hellbender conservation. This project will highlight how conservation professionals can pair with landowners to the benefit of all. We are very excited about moving forward.” 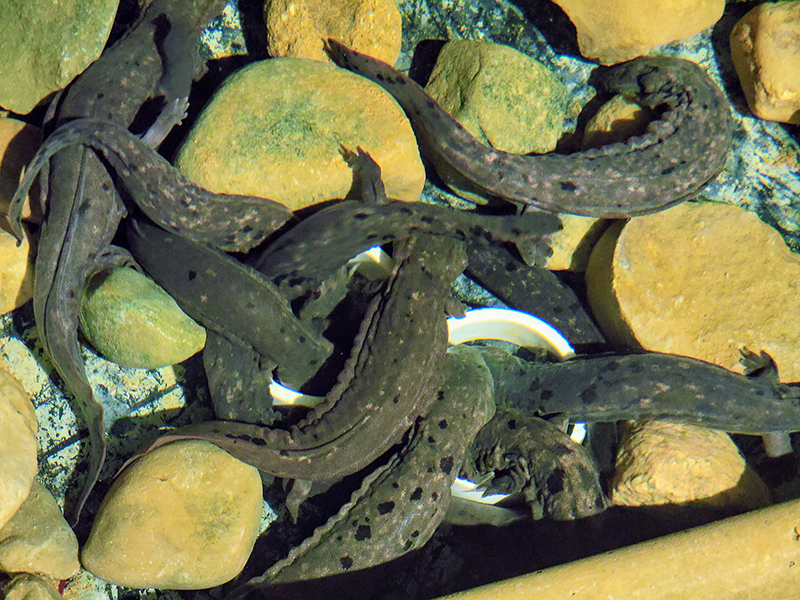 Eastern hellbenders, the largest salamanders in North America, breathe through capillaries near the surface of their skin, absorbing oxygen directly from the water. This requires high-quality streams, and the species has struggled to survive after decades of declining water quality and habitat degradation.

Characterized by flat bodies and heads and slimy, blotchy brown skin with folds along the sides and long tails, Eastern hellbenders live in shallow, fast-flowing, cool, rocky rivers and streams across the United States from New York to Georgia and as far west as Missouri and Arkansas. At maturity, the species can measure approximately two feet long.

Williams’ hellbender lab is also actively collaborating with the Indiana Department of Natural Resources and Indiana Division of Fish and Wildlife as well as several other partners across 13 states on conservation projects and educational opportunities for teachers and children.

As part of each project, partners offer value-added contributions to amplify the impact of RCPP funding in an amount equal to or greater than the NRCS investment.

“RCPP puts local partners in the driver’s seat to accomplish environmental goals that are most meaningful to their community.  Joining together public and private resources harnesses innovation that neither sector could implement alone,” Indiana NRCS State Conservationist Jerry Raynor said.

An Emergency Plan Is Essential To Keeping Chickens