Explore The Healing Power Of Hemp

Hemp can be used as a fiber crop, for grain, seed oil and CBD production. It’s a textile, a food crop and a medicinal herb. This singular plant is so valuable that in 2021 more than 500,000 acres of American farmland were dedicated to industrial hemp production.

This may not seem like much compared to the 90 million acres of corn grown in the U.S. that same year. But considering just 8 years prior, in 2013, total hemp production in the U.S. was zero acres, it would seem hemp might be the next big thing in American agriculture.

It doesn’t matter whether you own a small-scale hobby farm or an extensive for-profit operation. This versatile plant is sure to have something to offer everyone.

A New Crop with an Old History

While hemp might seem like a new crop in today’s world of modern agriculture, this useful herb has been cultivated on this continent longer than the U.S. has even been a country. Hemp was first introduced to North America in 1606 and quickly became a favorite crop amongst colonial farmers.

Hemp was used for to make cloth, sails, paper, rope and lamp fuel. This amazing plant was considered so useful that in the 1700s, American farmers were legally required to grow hemp on their farms. George Washington himself grew hemp on his estate, and the first American flags were made from hemp fiber.

Not only is hemp useful, but growing this incredible plant could be considered patriotic.

You may have heard these terms used somewhat interchangeably in conversation. But in the eyes of the law, hemp and cannabis are treated very differently.

Be sure to check with your local authorities before growing either of these crops to avoid any potential complications. This could be as simple as a call or email to your local extension office inquiring on the particular rules surrounding hemp production in your area.

Although these two crops fall under different regulatory stipulations, they are in actuality different cultivars of the same species. To put it simply, hemp is any strain of Cannabis sativa that contains less than 0.3 percent THC (tetrahydrocannabinol, the main psychoactive compound in the plant).

It’s the hemp plant that is grown for its fibrous stalk, healthy seeds and flavorful oils. This is also the plant used to craft medicinal CBD products. On the other hand, the cannabis plant, with its much high content of the chemical compound THC, is grown for recreational uses. 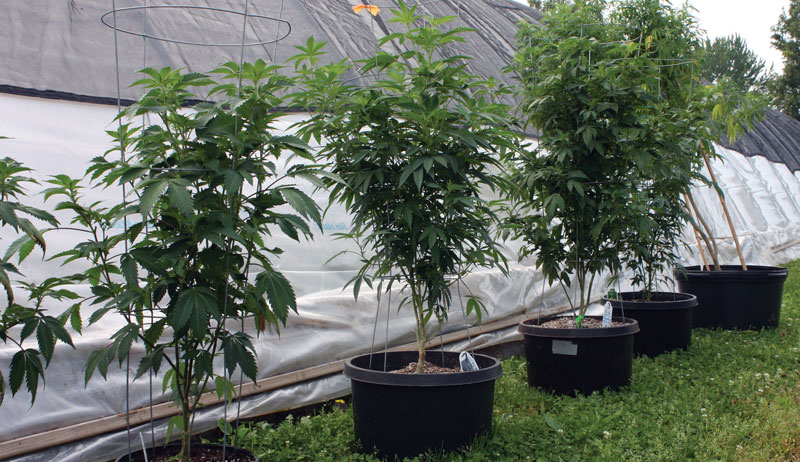 Hemp is a fast-growing plant that will thrive in most soil types and can produce a seed crop in 100 to 150 days, depending upon the cultivar. The plants require full sun, and the seedlings require consistent watering for the first few weeks. But once they are established, hemp plants are quite drought tolerant.

Hemp plants are dioecious, meaning some plants produce exclusively male pollen-shedding flowers while others have entirely female pollen-receptive flowers. If hempseed is your goal, you’ll need a decent population of plants to ensure adequate pollination occurs in order to have reliable seed production.

The female plants will hold the seeds. When these are mature, the seed heads can easily be cut off by hand using garden shears and collected. Larger-scale growers can use a combine to harvest and thresh their hempseed harvest.

Seeds harvested by hand should be winnowed to remove any debris. Then they can be stored in food grade buckets or similar containers for up to a year. Add these seeds to salads, snack mixes or yogurt, or practically any other dish to add a crunch texture and deep, nutty flavor.

The seeds can also be pressed to release their vibrant, green oil. 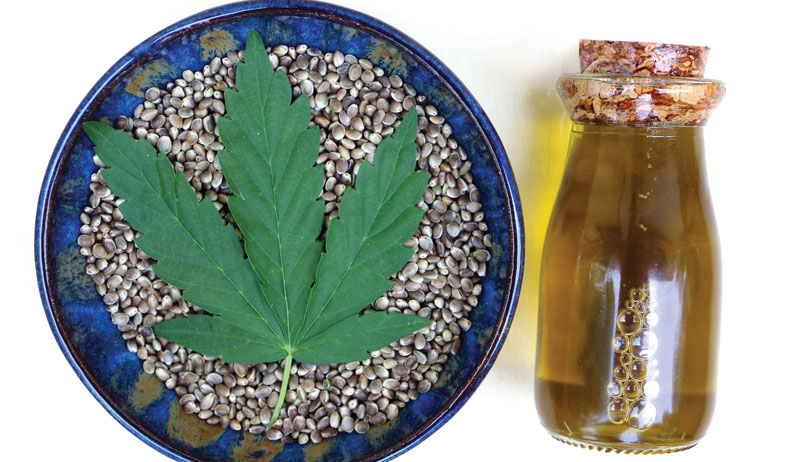 This same acre of hemp will also produce more than 500 pounds of edible seed meal and almost 1,300 pounds of fiber, making hemp one of the most productive crops you can grow on a farm.

Hempseed oil is also very easy to produce on a small scale at home. Using a simple, hand-turned expeller press, one can produce all of the hempseed oil one might need for a week or more in just a couple of hours’ time.

These basic machines are relatively inexpensive and widely available online.

With a little bit of creative engineering, these machines can be upgraded to a motorized model. Or, for an off-grid approach, consider converting to a bicycle-powered oil press, making the work easy and fun.

On my farm, we’ve pressed hempseed oil on a Piteba-brand oil press for more than a decade. This single piece of equipment is all we’ve ever need to press plenty of oil for our family’s needs.

Due to it low smoke point, hempseed oil isn’t meant to be used in high-heat applications such as baking or frying. But it’s ideal for any cold culinary applications where the green, nutty flavor and nutritional benefits of the oil will remain intact.

Try it in salad dressings, marinades or as a finishing oil drizzled on roasted meats and vegetables. Add it to smoothies for a serious nutrition boost. Hempseed oil is rich in omega-6 and omega-3 fatty acids, antioxidants, vitamins A and E, and minerals such as calcium, zinc, magnesium and potassium.

This nutritious oil is also a perfect choice to include in handcrafted lotions, salves and other herbal wellness products. Hempseed oil is very moisturizing and can be used topically to soften skin and eliminate fine lines, wrinkles and other signs of aging.

The anti-inflammatory oil is also an excellent treatment for acne, as it unclogs pores and reduces scarring.

Hempseed Cake & How to Use It

During the oil extraction process, the hempseeds are crushed and squeezed in the press, coaxing out the flavorful oil. What remains of the seed, after the oil has been removed, is known as the press cake, or seed cake.

This seed cake may be the byproduct of oil production, but it’s certainly not to be wasted. Hempseed cake is completely edible and contains great nutritional value.

Although a hempseed contains approximately 30 percent oil, it’s impossible to extract all of the seed oil using mechanical extraction methods. This means the seedcake itself still carries a notable amount of oil and provides valuable nutrition.

Pressing your own hempseed oil at home is essentially a zero-waste operation!

For household use, you can mill your hempseed cake into a fine powder using a food processor, and add it to breads, pancakes, smoothies or any other dish that might call for whole hempseeds. I substitute about 1⁄4 cup of milled hempseed cake for flour in my regular bread recipe. It bakes up a tasty and healthy loaf, perfect for sandwiches or even my morning toast.

Hempseed cake is also a valuable feed supplement for small livestock. The seeds are high in protein, and sheep, goats and pigs just absolutely love the hempseed’s fresh, green taste. We add crushed hempseeds to our chicken feed as well, and the resulting eggs have a rich flavor and deep, almost orange-colored, yolks.

Feeding your animals this nutritionally dense food has a notable impact on the quality of their meat, too. Homegrown meat is always better than the mass-market alternatives. But the addition of hempseeds to your livestock’s diet will take their flavor profiles and nutritional values to a whole new level of yum! 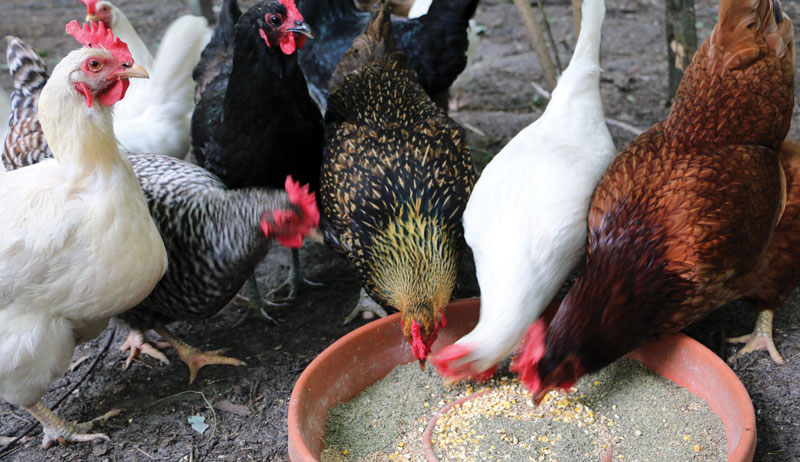 Using CBD Around the Farm

CBD, or cannabidiol, is the second most prevalent chemical compound in cannabis plants. It’s also the term used to refer to cannabis products made by extracting this particular compound from the leaves, stems or flowers of the plant.

CBD oil is produced by extracting CBD from the plant material and diluting it in a carrier oil, typically made from hempseed or coconut oil. CBD tinctures, on the other hand, are made by steeping cannabis plant material in high-proof alcohol solvent.

Both of these methods are effective in extracting the beneficial components from the hemp plant and are often used as the main ingredient in consumable as well as topical wellness products.

CBD is said to be useful for relieving anxiety, inflammation and chronic pain. The scientific evidence is minimal, but anecdotal evidence in support of these claims is quite widespread.

Many small-scale farmers have begun utilizing these products around their farm, often as part of an overall wellness regimen for their animals. CBD is also said to increase appetite resulting in weight gain, which is ideal for beef and pork producers.

Some farmers are finding success giving their animals CBD products for anxiety to help keep the animals more relaxed during transport. It’s widely believed that extreme stress before butchering can negatively impact the flavor of the meat. So the calming effects of CBD might come in handy for this as well.

It’s important to note that CBD or any other hemp-containing products haven’t been approved by the FDA for use in animals as drugs or food/feed supplements.

Farmers might also benefit from using some CBD on the farm, too. Many topical products are available that are said to be quite effective at relieving sore and tired muscles, an ailment all too familiar to anyone working on a farm.

In addition to this, CBD is thought to help promote a restful night’s sleep. Good rest is critical to a productive day’s work.

Hemp is an ancient plant that offers us many modern uses. Whether it’s for food or medicine, hemp is easy to grow and even easier to use. Learn how to grow, harvest and press your own hempseed oil with my book The Complete Guide to Seed & Nut Oils from New Society Publishers, now available wherever books are sold.

This article appeared in Healing Herbs, a 2023 specialty publication produced by the editors and writers of Hobby Farms magazine. Aside from this piece, Healing Herbs includes articles on preserving herbs, container herb gardening, tea advice and more. You can purchase this volume, Hobby Farms back issues as well as special editions such as Hobby Farm Home and  Goats 101 by following this link.

Assessing global biodiversity with ears to the ground, NASA eyes in the sky

Can You Identify This Mystery Chicken Breed?