It’s not uncommon for a beginner or an advanced chicken-keeper to raise a brood of chicks without the help of a mother hen. Maybe you’ve hatched the chicks from eggs in an incubator, or perhaps you ordered them through a parcel delivery service and they arrived in a box of peeping yellow fluff. In either case, it’s critical to keep the new chicks warmed to a safe temperature over the next several weeks.

For many people, a heat lamp is the obvious go-to choice for keeping the brooder box warm. These devices—looking like a robust clamp light—often utilize a 250-watt or similar bulb to keep the chicks’ area warm.

But heat lamps aren’t perfect, and there are a couple of downsides. For one thing, heat lamps are … well, hot. The bulbs put out plenty of light in the visible spectrum, but they also emit a great deal of infrared light. Infrared is the “color” below red on the spectrum. You can’t see it, but you can feel it as heat, and heat lamps deliver plenty of it.

Because one bulb can easily heat a small space such as a chick brooder to 100 degrees Fahrenheit, the temperature of the bulb itself and its reflector can become very high indeed. While plenty of people utilize heat lamps without incident, there are more than enough sad stories of heat lamps that fell off their support and started a fire—stories that make some people think twice about using them.

So if not a heat lamp, what are your alternatives? How are you going to keep those chicks happily warm in their cozy but artificial environment until the 6-week mark, when they can safely join the rest of the flock outdoors?

Happily (and maybe surprisingly), you actually have several options. If you’d like to experiment with saying bye-bye to the heat lamp, consider some of the following. 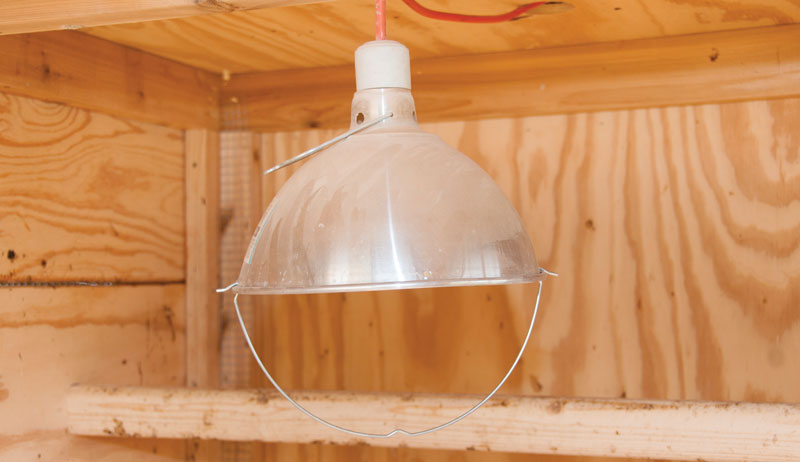 An easy way to move past a heat lamp is to utilize a commercially built stand-alone chick brooder box. These are essentially similar to egg incubators, except they’re designed specifically for a brood of hatched chicks.

Some models are designed to automatically keep the temperature inside consistent by running the heater only as needed. This saves you effort and offers some peace of mind.

In any case, it eliminates the possibility of a hot heat lamp falling from its stand or accidentally coming into contact with other objects. Some stand-alone brooders even include handy built-in chick feeders and waterers, saving you some time.

While these products can be more expensive than a simple heat lamp or some the other options here, stand-alone brooders offer a level of convenience and value that may be particularly appealing to beginning chicken-keepers.

Read more: Check out these brooder tips for baby chicks!

This option has a lot of benefits going for it. Low-energy brooder plates are basically small electric radiant heaters, only a few inches high, that chicks can crowd directly underneath or press up against. They often have adjustable stands that allow you to raise the height of the heater plate to accommodate the specific size of your chicks.

On these types of products, the temperature of the heating element is lower. But the chicks make up for it by being able to stand much closer without getting too hot. Because of this, these products may represent less of a fire hazard than a heat lamp.

Another benefit is that they use lower power—often below 40 or 50 watts, so they’re less expensive to use. Some versions are shaped like a mouse pad that the chicks stand on instead, although they may be designed for older chicks rather than just-hatched.

Most brooder plates designed for chicks of all ages feature the heating element as a “roof” that the chicks stand beneath to feel the heat.

You’ll still need some sort of brooder area/box the same way you would with a traditional heat lamp setup—a place to keep the chicks contained and to create a smaller area to keep warm. 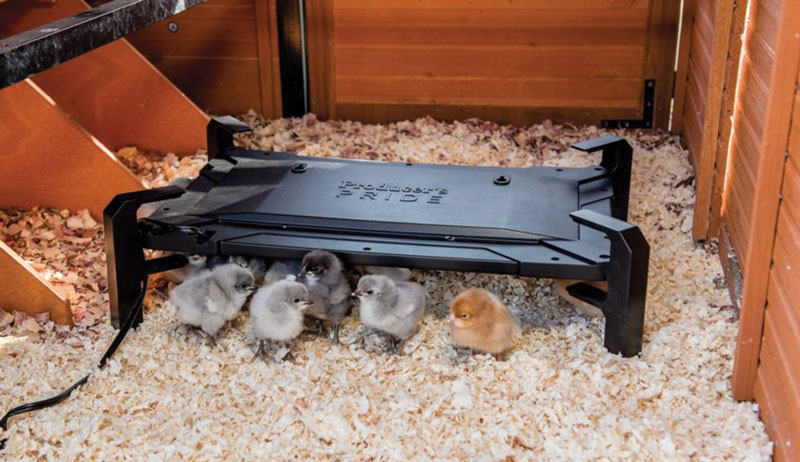 Some folks seek a simple heating method for their chicks—something that is easy, nonelectrical and passive, with no moving parts. Surprisingly, there is such a method: hot water bottles.

When filled with heated water and then wrapped with an insulated cover (to help make the heat last and to protect the chicks from touching something too warm), hot water bottles can successfully keep chicks warm in a small area. Some people seem to have good luck with this method, while others dislike the idea.

One problem is that great care has to be taken to make sure that the hot water bottles indeed keep the chicks warm. Unlike the steady reliability of a heat lamp or even a brooder plate, hot water bottles immediately start losing their heat the moment you finish filling them. This means that you have to frequently check the temperature of the area and refill bottles (even during the night).

Nevertheless, this option is reasonably popular, especially for off-grid situations. It’s also a fine backup plan for power outages. (Some people experiment with chemical hand warmers as well during outages.) But you really must take care not to let the chicks get too cold.

Let There Be Light

Even if you’re not utilizing a heat lamp, you’ll still want to supply your growing chicks with a light source, of course. Because you no longer need the light source to supply heat, a low-wattage LED bulb can easily produce plenty of light, while maintaining a low temperature and decreasing your fire danger.

And you won’t have to run the light during the night, so you can better simulate a day/night cycle for your chicks. 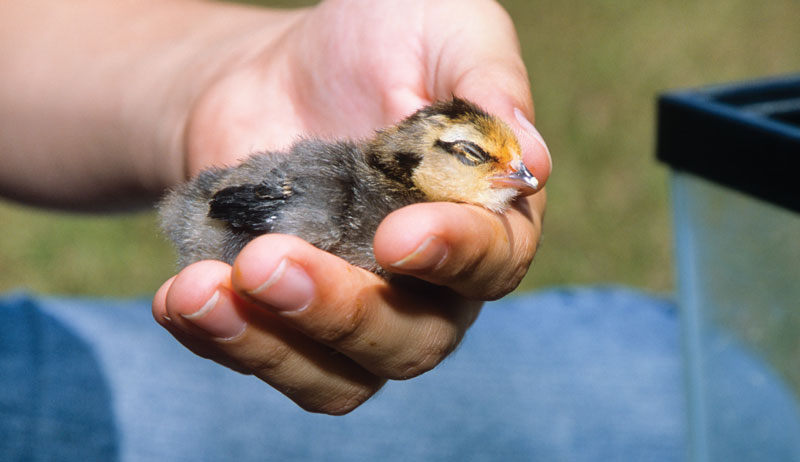 No matter what heat source(s) you ultimately choose to keep your growing chicks warm, it’s a good plan to place a reliable thermometer in their vicinity so that you can accurately keep an eye on the temperature and carefully decrease it slowly as the chicks grow feathers. This will also help you monitor that your alternative heat sources are indeed doing their job and maintaining the required temperature.

The behavior of chicks can also be an indicator. If they’re huddled tightly together, they may be too cold. If they’re spread widely apart, it may indicate the brooder is too warm.

Raising chicks is one of those rewarding pursuits that helps larger-scale homesteaders on their goal to self-sufficiency. And the endeavor can also offer small-scale beginners a chance to get a taste for farming without a major investment of time, money and land.

Along with beekeeping, raising chicks is the perfect way to ease into a farming lifestyle. And if some of these heat lamp substitutes can help bring you a step closer to that reality, or make your current setup easier, than they just might be worth looking into.

Take care to keep those chicks warm and safe!

Some of these ideas may be helpful to homesteaders living in an off-grid situation. An average heat lamp running nonstop and operating at a common wattage such as 250 watts will use 6,000 watts (6 kilowatts) over a 24-hour period. And you’ll need to keep it running for weeks!

Read more: Off-grid meat chickens? It can be done!

That’s a large additional load to place on an off-grid system that is functioning off solar panels or perhaps a wind turbine.

And yet it’s often the very people trying to live in a sustainable off-grid lifestyle that are most interested in small-scale farming pursuits such as raising chicks. Being able to incorporate some of the simple methods here can help bridge the gap between a functioning brooder and a major drain on your off-grid power system. Chick brooder plates, for instance, may require only 1/5 the electrical draw of a heat lamp.

This article originally appeared in the November/December 2022 issue of Chickens magazine.

Can We Trust AgTech With the Solution to Climate Issues?

Can We Trust AgTech With the Solution to Climate Issues?