This Cool Chicken Coop Keeps It Cool In South Carolina

We bought our homestead in 2021 and named it the “Lil S Farm.” Our first major project after building the house was building a chicken coop. We spent hours looking at hundreds of different types of coops and even bought plans for several of them.

Read more: Here’s how to get your kit chicken coop ready for winter,

One issue with coops is keeping the run dry. Usually, this is rectified by intensely grading the area, but this can be costly.

To save money, I designed our coop with a lean-to roof rather than a gable. This allows the water to shed to one side, which makes grading much easier and cut down our costs.

With the roof, we used corrugated asphalt panels rather than steel, tin or traditional shingles. The asphalt panels were much easier to cut, handle and fasten than the other materials.

Our roof has already withstood a very bad storm where we had winds up to 70 miles per hour. Choosing asphalt panels was one of my best decisions on coop construction. 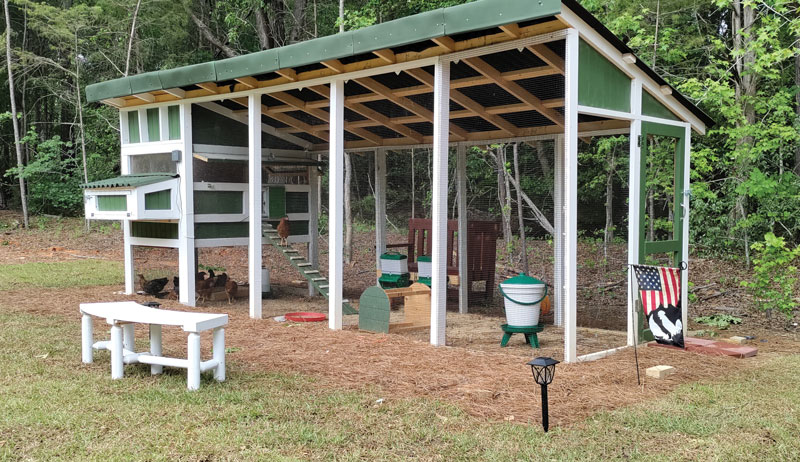 The coop itself has two very large windows with two smaller windows built in the two coop doors. This allows plenty of ventilation. Our girls love to sit on their roost and look out the windows.

The third window above the egg hutch is a Plexi­glas window that doesn’t open. For design purposes, this was easier to build because of the lack of clearance above the hutch’s roof paneling. But it also gave the chickens a wonderful view when it rains. Right before we close the coop up for the night, the pecking order gets quite competitive on who gets to roost by that window. 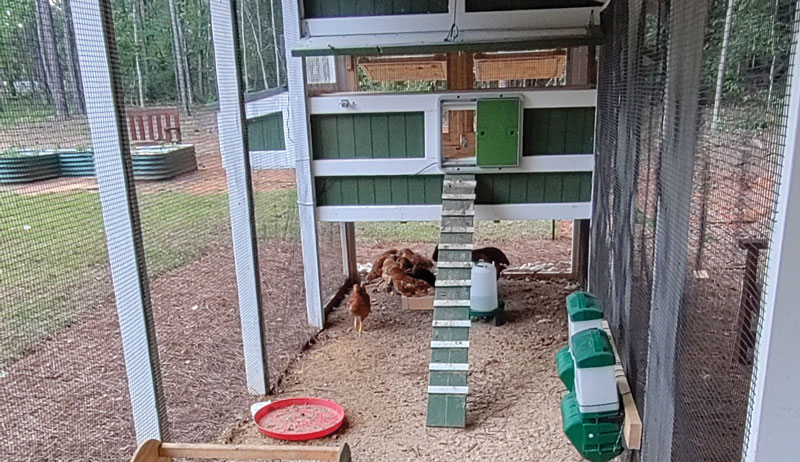 For security, we have PVC-coated 1⁄4-inch hardware cloth throughout the run, on every window, and skirted around the whole coop. We also have locking latches on all openings.

A team of raccoons has tried multiple times to get to our girls without success. Our coop has proven to be predator-proof.

Around the coop, we have benches so we can sit in the mornings and afternoons to talk to our girls. It has become a full family affair to congregate in the evenings around the henhouse. Our girls seem to love their home, and our family loves having them on our “Lil S Farm.”  — Brad, Katie & Meekin Stokes, Chapin, South Carolina

This article originally appeared in the November/December 2022 issue of Chickens magazine as a “Cool Coop” feature. Have a cool coop you’d like to share? Email us a short write-up (~250 to 500 words) about your chicken coop along with a few images to chickens@chickensmagazine.com with the subject line One Cool Coop, and include your name and mailing address. Check out Chickens magazine for current prizes and contest rules.

The Fertilizer Shortage Will Persist in 2023